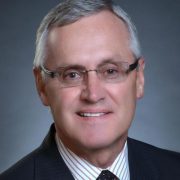 FEI is pleased to host Jim Tressel, president of Youngstown State University for his presentation on leadership and excellence.

Jim Tressel became the ninth president of Youngstown State University on July 1, 2014. Since then, the university has made remarkable strides: enrollment and student retention continue to rise; freshmen classes are more academically-accomplished; graduation numbers are at an all-time high; grants, scholarship endowments and donations are soaring; campus housing has increased; and streets on and around campus have undergone significant upgrades.

A native of Northeast Ohio, Tressel earned a bachelor’s degree in Education from Baldwin-Wallace College and a master’s degree in Education from the University of Akron.  He was head football coach at YSU for 15 years, winning four national championships. He also was head football coach at Ohio State for 10 years, winning seven Big Ten titles, earning ten bowl appearances and winning the 2002 National Championship. After leaving Ohio State, Tressel served as executive vice president for Student Success at the University of Akron, and then returned to YSU in 2014 as president.

Mr. Aussem will discuss the uses of buy-sell agreements and the mechanisms for funding the actual purchase and sales event whether it be triggered by death, disability, departure or discord.

complimentary valet parking available at The Union Club. Access the garage off of E 12th.