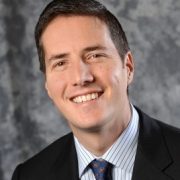 Bernie Moreno’s meteoric rise to one of Greater Cleveland’s most successful and admired business leaders began in 2005 with his purchase of a small, underperforming Mercedes-Benz dealership on the city’s west side. In just one year, the reborn North Olmsted dealership earned the prestigious “Best of the Best” award from MercedesBenz. It would go on to win the award for 10 consecutive years, an accomplishment no other dealer has achieved.

Over the next decade, the Bernie Moreno Companies became one of the fastest growing and most celebrated auto-dealership organizations in the country. The company, which now operates a thriving collection of luxury dealerships across several states, has been honored for its growth, client service, and community involvement. In 2015, Bernie Moreno Companies made its first non-automotive acquisition: Hotcards.com, Cleveland’s leading online printing and marketing company.

Moreno attributes the success of his business to a deeply held belief that shopping for, purchasing and owning a vehicle should be a positive experience with unparalleled service.

In addition to his business success, Moreno has been widely recognized for his public service and for his commitment to improving the social and economic well-being of the communities where his dealerships operate. He serves in leadership capacities at Cleveland State University, where he is board chair and founder of the Bernie Moreno Center for Sales Excellence, and at the Cuyahoga Community College Foundation, where he is board vice-chair. He also serves on the boards of Cleveland Foundation, the Greater Cleveland Partnership, Destination Cleveland, the Young Presidents Organization and the Fifty Club of Cleveland.

Moreno was born in Bogota, Colombia, moved to the United States at the age of 5 and became a United States citizen at age 18. After graduating from the University of Michigan with a bachelor’s degree in business administration, he began his career in the automotive industry with the Saturn Corporation.

When the workday is over, Moreno returns to his home in Westlake, Ohio, where he cherishes time with his wife and four children.

This presentation will cover SunTrust Robinson Humphrey’s view of the current state of the market and the forces driving this environment.

We will share what Buyers and Sellers are saying, from our client interactions as well as research conducted by the National Center for the Middle Market (a research organization affiliated with The Ohio State University).

Finally we will discuss what it means to be “deal ready” and the steps to consider.

This meeting is a joint meeting with ACG Cleveland

complimentary valet parking available at The Union Club. Access the garage off of E 12th.